A Prayer for Torn Stockings, by Suzanne O’Connell 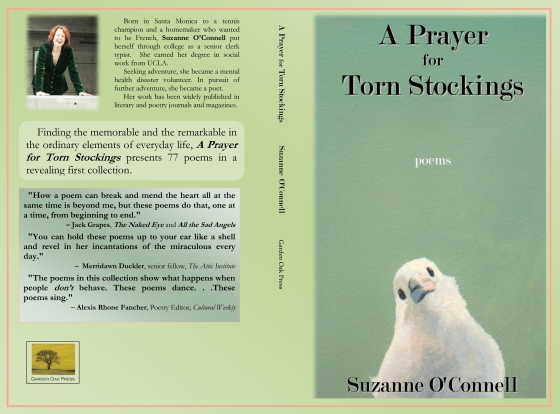 Finding the memorable and the remarkable in the ordinary elements of everyday life, A Prayer for Torn Stockings presents 77 poems in a revealing first collection.

Praise for A Prayer for Torn Stockings:

One’s mind boggles at the range of the poems in this book, the authenticity of voice, the vividness of the imagery, and most of all, the sheer breathtaking adventure of language. Were I not prone to speechlessness, I would be speechless. How a poem can break and mend the heart all at the same time is beyond me, but Suzanne O’Connell’s poems do that, one a time, from beginning to end. If you read only one book of poetry this year, this should be the one.

— Jack Grapes, The Naked Eye and All the Sad Angels

Suzanne O’Connell’s poems live between the imagination we never lose and the innocence torn from us; witty, tribal, dream-driven and memorable, her poems are a lantern on childhood secrets and adult desires. Whether O’Connell is seducing Mr. Rogers, cooking a husband, or praying to Jesus for some decent breasts, these poems dance at a touch like wind chimes, anchored by a fierce intelligence and supremely gifted powers of observation. In gardens and domestic interiors where animals and spirits rule above the priss and prim of humans, O’Connell expertly weaves narratives of the power of families, lovers, shop keepers. Her poems conjure real worlds she beckons the reader to enter only to shut the door on hypocrisy and pretension.  These poems slip into the skin of other stories, you can hold them up to your ear like a shell and revel in her incantations of the miraculous every day.

“…I can’t tell you everything,” Suzanne O’Connell confesses in her poem, Seducing Mr. Rogers. But the secrets she spills in A Prayer For Torn Stockings are many. She is That Kind of Girl, the kind who “removes her clothes,/climbs the ladder to the rooftop… and dances like she was cardboard coming unglued.” She is the girl with the mother who “you can’t keep away,/no matter how hard you push.” (The Bears), the girl who thinks of herself as a piñata, the girl with feathers “sprouted from all (her) secret places,” (How Ignorant Bliss Is) the one who calls out to the night in dreams (If A Tree Falls). This contrasts beautifully with O’Connell’s flip-side persona, the woman who stabs her husband’s hand with a fork, goes into the ring to box her aged mother, the one whose first word was ‘material.’ “…She knew her family “would provide/colorful material for her stories./Maybe her first word was a warning to them to behave.” (Her First Word)   The poems in this collection show what happens when people don’t behave. These poems dance like that girl on the rooftop. These poems sing.

—  Alexis Rhone Fancher    Poetry Editor, Cultural Weekly; author of How I Lost My Virginity To Michael Cohen & other heart stab poems, and State of Grace: The Joshua Elegies. 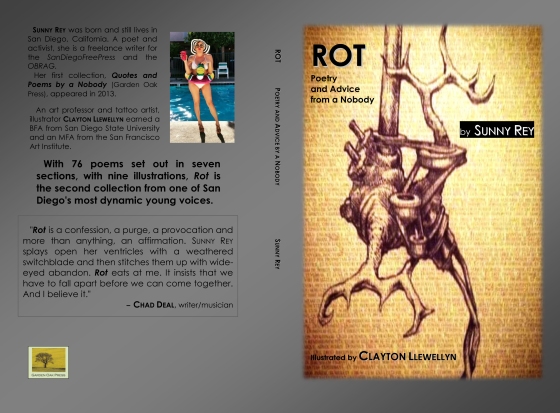 With 76 poems set out in seven sections (with nine illustrations that are as unique as the poems), Rot is the second collection from one of San Diego’s most dynamic young voices.

“Rot is a confession, a purge, a provocation and more than anything, an affirmation. Sunny Rey splays open her ventricles with a weathered switchblade and then stitches them up with wide-eyed abandon. Rot eats at me. It insists that we have to fall apart before we can come together. And I believe it.”               — ̶  Chad Deal, writer/musician